Nebraska NFA trust attorneys can help you create your totally legal Nebraska gun trust. A trust can provide you with the protections as outlined in the National Firearms Act giving you the ability to own and possess otherwise illegal weapons. Continue reading to learn more about how to get a gun trust in Nebraska.

Sometimes referred to as a NFA trust, this legal instrument makes it possible to own and make NFA items in all states where such items are legal. Attorney drafted trust can offer you the peace of mind of knowing that your Nebraska gun trust has been prepared by a licensed legal professional in your state. The benefits of having a firearms trust in Nebraska far outweigh the minimal cost that is involved in creating one.

Having Nebraska NFA trust attorneys create your trust is not the only option available. If you are confident in your abilities to follow instructions and simply fill in the blanks, a do it yourself gun trust may be a more affordable option and afford you more privacy.

Are Do It Yourself Gun Trust Legal In Nebraska ?

These type of NE gun trust are just as legally binding as one created by an attorney and the step by step instructions are clear and easy to follow.The cost savings are significant and well worth your time.

NFA items include fully automatic firearms, short barrel shotguns, and short barrel rifles. Other NFA items may be sound suppressors, destructive devices or weapons known as AOW (any other weapon). You will find a brief explanation below.

This type of rifle has an overall length of less than 26 inches and a barrel length of less than 16 inches. If a folding type stock is attached to the firearm, the measurement is taken with the stock extended and locked in an open position. Simply adding a stock to a handgun can in many circumstances instantly cause it to be reclassified as an SBR.

Removing the butt stock from a rifle and adding a pistol grip may also be cause for reclassification under federal law.

Being in possession of such a firearm without the proper BATFE registration paperwork and NFA tax stamp may constitute a felony under federal law and Nebraska SBR laws. There are however some rifles manufactured before 1934 that may be exempt from these laws. Visit our dedicated page for more information on Curios and Relics.

Silencers or Suppressors In Nebraska

A suppressor is any device attached to a firearm be it a rifle or pistol that lowers or muffles the report of a firearm. Some people confuse a flash suppressor with a sound suppressor. A flash suppressor requires no registration or tax stamp. Flash suppressors do nothing more than cool and disperse burning gases exiting a barrel without dampening the sound.

Some states may not allow ownership or use of silencers, be sure to research your state laws before purchasing a sound suppressor. Being in possession of a silencer without the proper paperwork and tax stamp is a felony. Learn more about the laws pertaining to suppressors in Nebraska.

Destructive devices in Nebraska include bombs, grenades, modern day artillery , chemical weapons and non-sporting firearms with a bore size over 0.50 inches. Although such firearms as the 12 gauge shotgun may have a bore in excess of 0.50 they are exempt from the NFA because they do have a generally accepted sporting purpose. Being in possession of a DD without the proper paperwork and tax stamp is a felony. 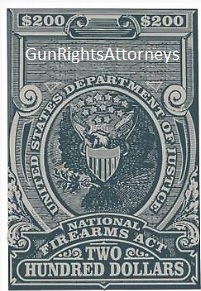 Any other weapon or AOW

Excluded items include firearms built prior to 1898 and do not use conventional ammunition. Owner ship of Title II weapons is not illegal however one must have the proper paperwork and tax stamp to be in possession of such devices.

Some of the benefits of a Gun Trust include not having to wait on your chief law enforcement officer (CLEO) to sign off on your purchases. There is also no fingerprint submission required when purchasing a firearm through your trust and it affords you more privacy when making purchases.

Contact any of the Nebraska NFA trust attorneys listed below to learn more about how to set up a trust or create your own totally legal DIY NFA Trust just at a fraction of the cost !